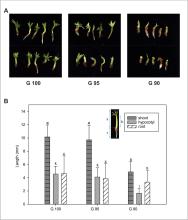 In Norway spruce, as in many other conifers, the germination capacity of somatic embryos is strongly influenced by the desiccation phase inserted after maturation. The intensity of drying during desiccation eminently affected the formation of emblings (i.e., seedlings developed from somatic embryos). Compared to non-desiccated embryos, the germination capacity of embryos desiccated at 100% relative humidity was about three times higher, but the reduction of relative humidity to 95% and 90% had a negative effect on the subsequent embryo development. The water loss observed in these embryos did not lead to an increase in lipid peroxidation, as shown by malondialdehyde levels. Another metabolic pathway in plants that mediates a response to abiotic stresses is directed toward the biosynthesis of polyamines (PAs). The activities of PA biosynthetic enzymes increased steadily in embryos during desiccation at 100% relative humidity, whereas they decreased at lower humidity. The total content of free PAs in the embryos gradually decreased throughout desiccation. The increase in free putrescine and perchloric acid-insoluble putrescine conjugates was observed in embryos desiccated at lower humidity. These changes were accompanied to some extent by the transcription of the genes for the PA biosynthesis enzymes. Desiccation at 100% relative humidity increased the activity of the cell wall-modifying enzymes β-1,3-glucanases and chitinases; the activities of these enzymes were also significantly suppressed at reduced humidity. The same pattern was observed in the transcription of some β-1,3-glucanase and chitinase genes. Desiccation treatments triggered metabolic processes that responded to water availability, suggesting an active response of the embryo to the reduction in humidity. A positive effect was demonstrated only for desiccation at high relative humidity. Some of the physiological characteristics described can be used as markers of inappropriate relative humidity during somatic embryo desiccation. 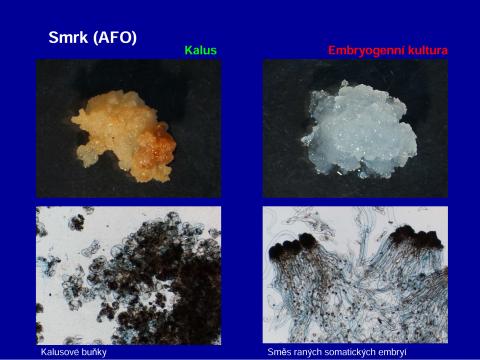